By Jeff Goldstein on February 6, 2012 in Program News

A request to all SSEP Community Program Directors and teachers subscribed to this Blog: We would be grateful if you could disseminate this blog post to parents across your community. 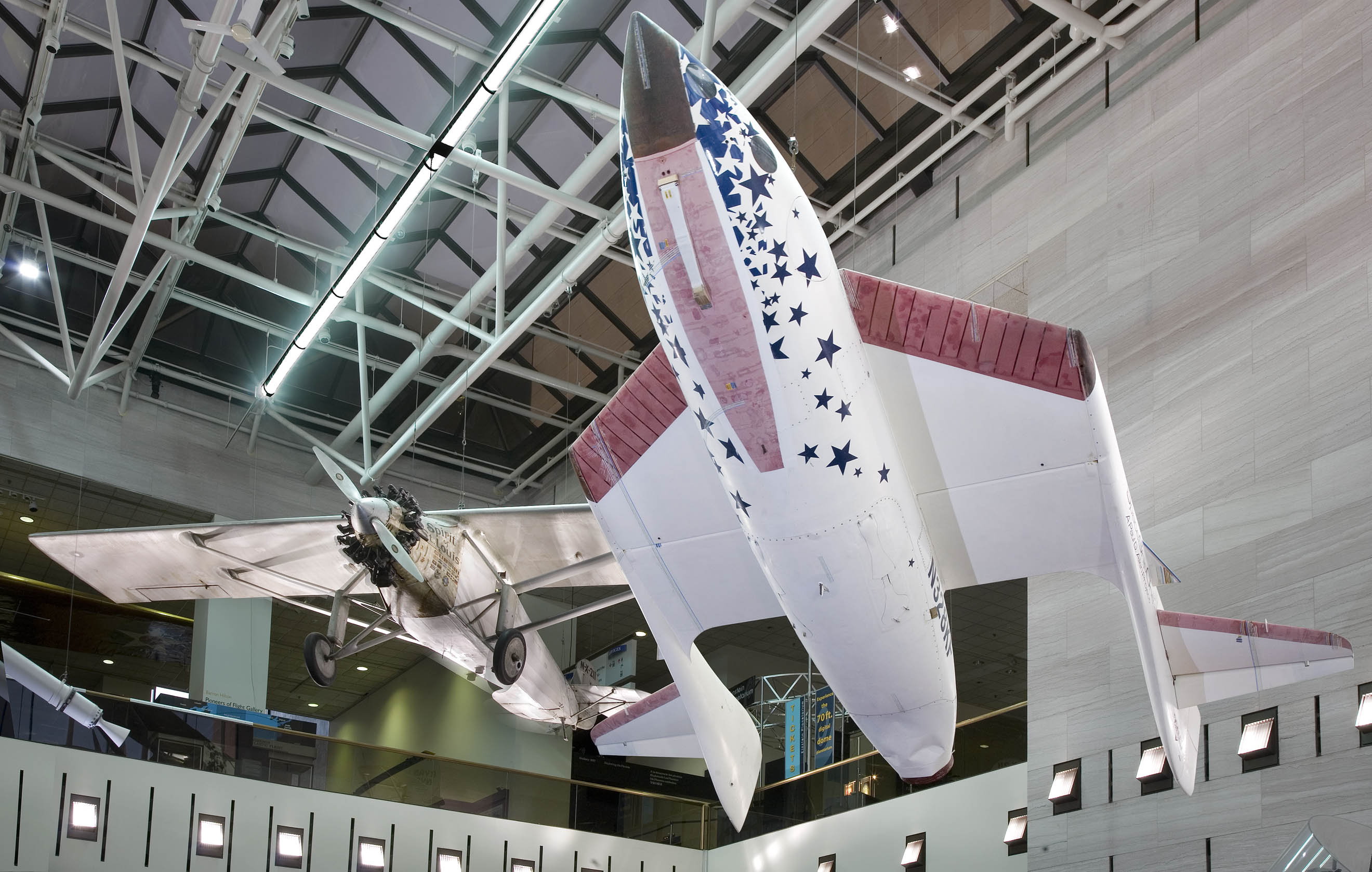 The Spirit of St. Louis and SpaceShipOne at the Smithsonian's National Air and Space Museum, in Washington, DC

This is an invitation to the parents of all the student researchers, and student mission patch designers, that are participating in SSEP Missions 1 and 2 to ISS, and that took part in SSEP on STS-134 and STS-135. We’d like to invite you aboard for an SSEP extended mission of sorts—to be part of our new commitment to leveraging the SSEP experience into something bigger.

The National Center for Earth and Space Science Education (NCESSE) is expanding the Student Spaceflight Experiments Program (SSEP) experience so all students that have participated to date—and their teachers and families—can extend the experience on the high frontier into a sustainable journey, through home activities, lessons for the classroom, and online and multimedia special events.

SSEP was designed to provide an authentic window on real research and human exploration by immersing the next generation in real research, and using the captivating subjects associated with space exploration and space science as the interdisciplinary hook. We conservatively estimate that more than 10,000 students have now been directly engaged in microgravity experiment design for the 3 SSEP flight opportunities to date, and at least that many in mission patch design. With all that engagement, with all that excitement, why not leverage it into something bigger, and something sustainable? It is a desire that grows from our belief that good education ought to embrace sustainable community-wide involvement. (Read about NCESSE’s embraced Learning Community Model for STEM education.)

Just because a flight opportunity is over, doesn’t mean that your daughter’s or son’s journey⎯their SSEP adventure in human exploration and learning⎯needs to end. You are now part of this remarkable ‘family’ of communities, with a shared experience regardless of whether you participated in SSEP in Portland Oregon, or Shelton, Connecticut. Our fervent hope is that together we can keep their journey going!

The Bigger Picture
Many are not old enough to remember what it was like following the first flights of the astronauts with Projects Mercury and Gemini, and then the Apollo Moon landings.

It was a time when the space program captivated the imagination of young and old, and inspired a new generation of America’s scientists and engineers. And it was natural to think about a spacefaring future, with a permanent human presence⎯a space station⎯in Earth orbit, and routine access to space for ordinary citizens. It has been 50 years since that vision was inspired by the reality of the first astronauts in orbit, and now, that revolution in human capability has arrived.

In this very moment, we are living through the revolution in space access—and it is going mostly unnoticed. We now indeed have a space station in orbit. A stunning feat of engineering, you can see this massive vehicle from your backyard, and aboard her are astronauts from the nations of Earth (and likely for 3 months each year, experiments from SSEP student researchers). Behind the scenes, a large number of private companies are now racing to make space travel available to citizens, from suborbital flights that will allow passengers to see the curvature of our world and experience microgravity, to orbital vehicles capable of docking with hotels in orbit and guest rooms traveling 18,000 mph around the planet. Your children will be able to travel to and vacation in space, with online bookings for departure from not the nearest airport but nearest spaceport⎯and spaceports are under construction right now.

It was 85 years ago, in 1927, that Charles Lindbergh became the first to fly alone across the Atlantic Ocean non-stop in the Spirit of St. Louis. It was a stunning achievement, and the over a million people lining Broadway in New York City to greet him on his return to America was a testament to what he had done. His achievement was motivated by the $25,000 Orteig Prize offered by Raymond Orteig in 1919 for the first to fly non-stop from New York to Paris.

What Lindbergh did, and how it captured the collective human imagination across the globe, opened the floodgates for the development of a commercial aviation industry. Today, anyone that boards a passenger plane for points unknown should recognize that Lindbergh played a vital role in making that trip possible.

Now let’s jump 87 years after Lindberg’s historic flight. On October 4, 2004, a company called Scaled Composites led by aerospace designer Burt Rutan, and underwritten by space financier Paul Allen, claimed the $10 million Ansari X PRIZE as the first private company to build a spacecraft to travel into space, attaining a minimum altitude of 100 km (62 miles). More specifically, the X PRIZE was to be awarded to the “first private team to build and launch a spacecraft capable of carrying three people to 100 kilometers above the earth’s surface, twice within two weeks.” Their craft SpaceShipOne first entered space on June 21, 2004, with pilot Mike Melvill becoming the first U.S. licensed commercial astronaut after the flight. The two back-to-back flights that won the X PRIZE took place September 29 and October 4, 2004, with Melvill piloting the first flight and Brian Binnie piloting the second. With history repeating itself 87 years after Lindbergh landed in Paris, the achievement of SpaceShipOne has now opened the floodgates for commercial space travel for all of us.

It is noteworthy that given their common legacy, both the Spirit of St. Louis and SpaceShipOne hang next to one another in the Milestones of Flight gallery at the Smithsonian’s National Air and Space Museum (see photo above) in Washington DC, the location of the 2011 and 2012 Annual SSEP National Conferences in July.

We are now truly entering that Age of Spaceflight envisioned long ago. And your son or daughter, school, and community are directly plugged into this adventure through the Student Spaceflight Experiments Program. Why not use this shared experience to inspire our children right now in a sustainable way? Why not continue their journey, and your journey as a family?

Our Plan
Given the historic nature of our times, and given the inspiration of the Student Spaceflight Experiments Program and its ability to open an authentic window on space exploration and the space frontier, we are now concentrating on expanding the experience through home and web-based activities, lessons for the classroom, and special online and multimedia events—each of which will be announced as a separate blog post on the SSEP National Blog.

We want these new experiences to naturally grow from a significant number of scheduled, ongoing, and now routine SSEP flight operations and milestones. We are now in the midst of the flight phase for SSEP Mission 1, with a launch likely aboard SpaceX’s Dragon vehicle in Spring 2012 and payload return to Earth on Soyuz 29. The SSEP National Conference takes place this summer, July 2-3, 2012, at the Smithsonian’s National Air and Space Museum, immediately before 4th of July in the Nation’s Capital. Mission 2 to ISS experiment and mission patch design competitions are taking place Spring 2012, with launch to ISS scheduled aboard Soyuz 32 in September 2012. Finally, before the summer, we expect to launch SSEP 2.0, the most ambitious space science education program ever undertaken. This … is cool stuff, and we dare say this is the right stuff for engaging our children in science, technology, engineering, and mathematics (STEM) education.

We want your family to be part of it all⎯ live coverage of flight operations, at home family activities, e.g., spotting ISS in the night sky, lessons for the classroom, Twitter chats with space scientists and engineers, hopefully a SSEP community network-wide live conversation with the astronauts on ISS, coverage of the 2012 SSEP National Conference, and then SSEP Mission 2 to ISS launching in the Fall.

How To Be Part of the Extended Adventure
It’s really easy. To take part in the adventure, we’re inviting you—on behalf of your entire family—to subscribe to this SSEP National Blog so that you receive an email notification for each new blog post⎯each new opportunity for adventure.

To subscribe, go to the SSEP Home Page at http://ssep.ncesse.org where you can subscribe at the bottom of the right column on the page.

With the very best wishes,