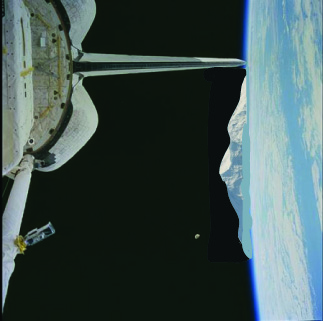 Ok, the solution is late by a few weeks, and I know you’ve been perplexed, and hanging out on the edge of your seat. You’ve been patiently waiting for me to read my bathroom scale on top of my 210 mile high mountain that apparently even the U.S. Geological Survey knows nothing about (I checked at their web site.) Wait! You say you have no clue what I’m talking about? Hey, you’ve got to read the original challenge FIRST! None of this lazy stuff going right to the answer.

Go read the original challenge, think about it for a while, and come back. I’ll wait right here for you. (What’s that Jeopardy music playing in the background?)

And now the answer—

So I go to the top of my 210 mile (340 km) high mountain, and look … here comes the International Space Station … and there it goes! Man, it was moving fast. It was cruising at a whopping 4.5 miles PER SECOND (7 km/s)! So 2 seconds ago, it was heading right for me, but still 4.5 miles away. A second ago it flew right by my face, and I looked in the window really really fast. And now it’s 4.5 miles away, heading away from me really fast.

Sure enough, when I looked inside, the astronauts were weightless—just floating around. So then I looked down at my bathroom scale, also expecting to be weightless—after all I’m at the same place they were. BUT WAIT!! My scale says I weigh nearly the same as my weight in my bathroom at home. More precisely, on top of my mountain I weigh 90% of my weight at sea level! So if I weigh 150 lbs (68 kg) at sea level, I weigh 135 lbs (61.2 kg) on my mountain. (Hmmm, wonder if I’ve discovered a new way to diet.) And I bet some of you won’t buy this without seeing the calculations. That’s good. That’s being a great scientist. (Keep reading.)

But this can’t be right!  Why are the astronauts weightless?

First some gravity basics. The force of gravity exists between any two masses, e.g., you and your chair, or your car and the fire hydrant it’s parked next to (hey move your vehicle.) But as forces of nature go it’s a really weak force. So for you to easily see it in action, at least one of the masses needs to be really massive. A good example is the force of gravity between YOU and the EARTH. The Earth is pretty massive, and the force exerted on you by the Earth is what we call YOUR WEIGHT. The force between two masses also depends on the distance between them. If you increase the distance between two masses, the force of gravity decreases. This comes together mathematically in the LAW OF UNIVERSAL GRAVITATION, a cool and pretty simple equation courtesy of Mr. Isaac Newton.

Ok, now let’s apply this. In the case of you and Earth, the distance between you and Earth is actually the distance between you and the center of Earth. But that distance is just the radius of Earth, or 3,963 miles (6,378 km.) When I go from sea level to the top of my really tall mountain, 210 miles (340 km) high, I’m increasing the distance between me and the center of Earth only a little bit. So my weight only goes down to 90% of its value at sea level. I actually used Mr. Newton’s equation to calculate my weight on top of my mountain. For those of you that want to see the calculation, I wrote it in my scratchy long-hand HERE.

Here’s another thing to ponder. The International Space Station (ISS) is pretty massive compared to you, and when it goes into orbit at 210 miles altitude, it also weighs 90% of its weight at sea level. The weight of an astronaut is also therefore 90% of his/her weight at sea level. THEY ARE NOT WEIGHTLESS. The term WEIGHTLESS leads to a deep misconception. They APPEAR weightless. Big difference. Remember that your weight is the force of gravity exerted on you by the Earth. There is NO question that such a force is exerted by Earth on both the Space Station and the astronauts inside.

But why do they APPEAR weightless? Well in my case, I’m standing on top of my mountain, where the mountain is holding me up and keeping me from falling under the action of gravity. Gravity is pulling me down with a force defined as my weight, and the mountain is reacting under the ‘load’ with an equal and opposite force up. So for me, I feel two forces: gravity pulling me down, and the mountain pushing me up. The forces cancel, and I just stand there at 90% of my sea level weight. I know that because the spring in my bathroom scale is being compressed between the two forces, and it’s causing the scale to record my weight. My bones also feel the resulting compression, which lets my body know they’re doing a good thing and are useful to keep (not the case in orbit where bone calcium is excreted.) But the Space Station is not resting on a mountain or anything else. The Space Station is ONLY experiencing the force of gravity. When that happens we call the situation free fall. The International Space Station is falling!! (I know!) This seems contrary to the way most of us think about falling objects, where an object that is falling is headed toward the Earth. But that too is a misconception. The Space Station is falling around the Earth! Here’s something I wrote for a grade 5-8 lesson on free fall (See the “To Community Leaders and Teachers” section below), and it explains how you can be falling around the Earth.

Now back to the idea of weightlessness. Here is an analogy to help you understand. You’re in an elevator in a tall building. The elevator is on the top floor. Inside the elevator you’re standing on your bathroom scale. You note the scale reads your correct weight plus a couple of pounds ’cause you just finished lunch at the spiffy top floor restaurant. Two forces are acting on you—gravity pulling you down, and thankfully the floor of the elevator pushing you up. Now (sorry) I cut the elevator cable. You feel that in your stomach? You’re now in free fall. You’re falling because I removed the ability of the elevator’s floor to push you back. The floor of the elevator is now falling WITH you. And the bathroom scale between your feet and the floor? Well, it’s also falling WITH you! There is now no way for the spring in the scale to be compressed between your feet and the floor … because the floor isn’t going to be pushing back. Look at the scale … it reads ZERO. You are weightless! What …. that’s not convincing you?? Hmmmm……

Ok, just stopped you with the emergency brakes.

A note to the sneaky (those that want to say “but Dr. Jeff you’re wrong.”) Yes, if the object is falling inside the atmosphere (like our elevator), it is technically not in free fall very long since the drag caused by the air soon becomes a force that needs to be considered. For instance, if you jump out of a plane, you’re in free fall in the beginning of the jump, but the drag force increases as your speed increases. Soon you get up to about 100 mph (160 km/hr) and you won’t go any faster because the force of gravity down is balanced by the drag force up due to the air. But that’s still a bit too fast for a landing, so you open a parachute to dramatically increase the drag from the air, and you live to jump another day.

To Community Leaders and Teachers

We developed a great grade 5-8 lesson which easily demonstrates that astronauts inside a free falling soda bottle space shuttle appear weightless. The lesson is part of the Building a Permanent Human Presence in Space compendium of lessons for the Center’s Journey through the Universe program. The lesson is titled Grade 5-8 Unit, Lesson 1: Weightlessness, which can be downloaded as a PDF from the Building a Permanent Human Presence in Space page. You can also read an overview of the lesson conducted as part of one of the many Journey through the Universe Educator Workshops, this one in Muncie Indiana.

On a related note, Journey through the Universe is about taking an entire community to the frontiers of exploration. It is a natural extension of the Student Spaceflight Experiments Program. A National Team of hand-picked scientists, engineers, and educators travels to a participating community for up to a week, talking to thousands of grade K-12 students one classroom at a time to provide an authentic window on the professional research experience, and conducting family and public programs and professional development workshops for teachers. It is another NCESSE program that embraces a community-wide engagement model for STEM education. Contact the Center if you would like to bring Journey through the Universe to your community. Or you might want to consider just a professional development workshop for educators, or a family and public program, through the Center’s To Earth and Beyond initiative. Here is a list of the family and public program topics with descriptions, which are presentations we routinely conduct after hours at the Smithsonian’s National Air and Space Museum for 450 attendees as part of the Center’s Family Science Night program. As is the case with SSEP, I’m pretty confident NCESSE can find the underwriting in support of a Journey through the Universe program for an interested community.

Read more about Journey Through the Universe at the NCESSE website:
http://ncesse.org/journey

Photo credit: NASA (there was no mountain in their photo — promise.)

Breaking News: SpaceX Launch Delayed by Likely at Least One Week
SpaceX Launch with SSEP Aquarius Payload Now Scheduled for May 7, 2012, 9:38 am EDT