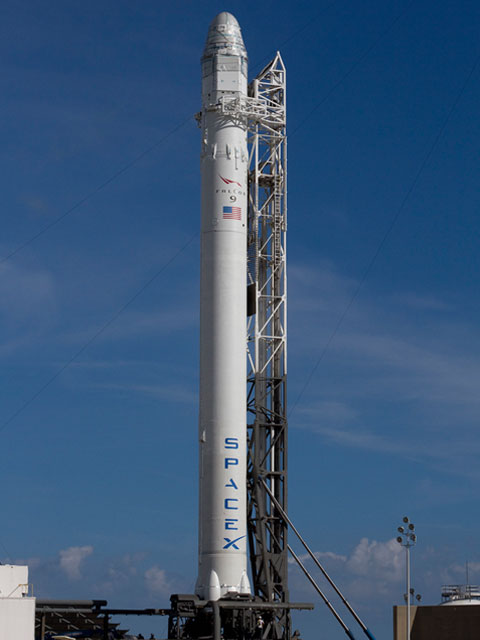 The SpaceX Dragon spacecraft rests on top of the Falcon 9 rocket at SpaceX’s launch site in Cape Canaveral, FL. Photo-credit and caption: SpaceX/NASA

The National Center for Earth and Space Science Education and NanoRacks would like to call your attention to NASA Media Advisory M12-084, titled,”Updated Coverage for NASA/SpaceX Launch and Mission to Station”, issued May 11, 2012, which includes the following:

“Saturday, May 19 (Launch day): A delegation from the Student Spaceflight Experiments Program (SSEP) will be at the Kennedy Press Site and available for interviews and experiment demonstrations between 3 and 4:30 a.m. The students represent three of the experiments that will launch aboard the SpaceX Dragon as part of the International Space Station NanoRacks 9 platform. A sign-up sheet will be available in the newsroom for those media representatives wanting to talk to the students.”

Let’s see, SSEP student teams, teachers, family members, and about 400 reporters from across the planet. Should be fun.

The full Media Advisory is provided below. Note NASA TV live coverage starts at 3:30 am EDT, about 1.5 hours before the 4:55 am launch. Note this SSEP website now has a NASA TV video widget in the right column.

NASA Honors Communities Across the United States Engaged in SSEP Mission 1 to ISS with a Feature Article
Invitation to the 2012 SSEP National Conference at the Smithsonian’s National Air and Space Museum, July 2-3, 2012