By Jeff Goldstein on September 17, 2013 in Program News 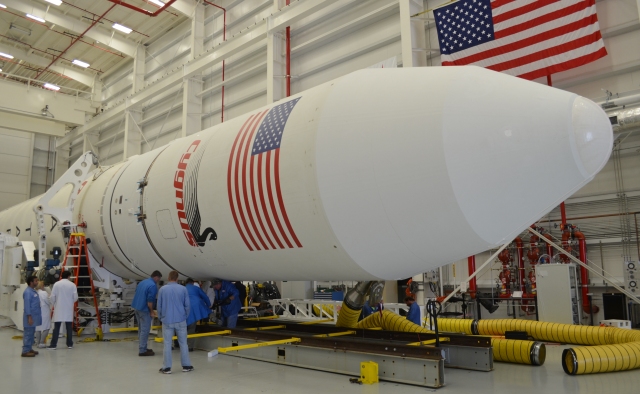 Cygnus Prior to Roll Out

We are now at T minus 20 hours 21 minutes from the historic launch of Orb-D1 – the first flight of the Cygnus vehicle to berth with the International Space Station. NASA TV will provide live coverage of liftoff of the Antares rocket starting at 10:15 am EDT, September 18, for scheduled liftoff at 10:50 am EDT. There is only a 15-minute launch window from 10:50 am to 11:05 am. Provided below is the full NASA Media Advisory with information on flight milestones and coverage on NASA TV.

If you’d like to watch NASA TV right here, we’ve provided a video port below, right next to the countdown clock and the Twitter feed for #SSEP1. Feel free to tweet with the #SSEP1 hashtag and join the conversation.

Orbital Sciences Corp. of Dulles, Va., will postpone by at least 24 hours the launch of its Antares rocket and Cygnus spacecraft on a demonstration mission to the International Space Station. The new launch window is targeted for Wednesday, Sept. 18 between 10:50 to 11:05 a.m. EDT from the Mid-Atlantic Regional Spaceport Pad-0A at NASA’s Wallops Flight Facility in eastern Virginia.

Cygnus’ rendezvous with the space station remains scheduled for Sunday, Sept. 22. NASA Television will air pre- and post-launch news conferences and provide live launch and rendezvous coverage of the mission.

The postponement is due to a combination of Friday’s poor weather, which delayed rollout of Antares to the launch pad, and a technical issue identified during a combined systems test held Friday night involving communications between ground equipment and the rocket’s flight computer. The problem has been identified and corrected. The teams are working to understand why the problem occurred.

NASA will preview the launch and mission in a news conference at 2 p.m. Tuesday, Sept. 17, at the Wallops Visitors Center. NASA TV and the agency’s website will air the briefing live with question and answer capability available from participating NASA centers or on the telephone. To participate using the phone bridge, which is operated out of NASA’s Johnson Space Center in Houston, journalists must call the Johnson newsroom at 281-483-5111 by 1:45 p.m.

Questions also can be asked during all briefings via Twitter by using the hashtag #askNASA.

The prelaunch briefing participants are:

A post-launch news briefing will begin at approximately 12:30 p.m. at the Wallops Visitors Center. Johnson Space Center will operate a phone bridge for the post-launch briefings. To participate in the briefing by phone, reporters must call the Johnson newsroom at 281-483-5111 at least 15 minutes before the start of the briefing.

The deadline to apply for accreditation to attend the launch has passed.

On Sunday, Sept. 22, NASA Television coverage of rendezvous will begin at 4:30 a.m. and will continue through the capture and installation of the Cygnus spacecraft. Capture is scheduled for about 7:17 a.m. with installation of the craft beginning about 9 a.m.

At about 1 p.m., after Cygnus operations are complete, a joint news conference will take place at Johnson and at Orbital’s Headquarters at 45101 Warp Drive in Dulles, Va. The briefing will be carried live on NASA Television and the agency’s website. Media may participate by telephone by contacting Johnson’s newsroom at 218-483-5111 no later than 15 minutes prior to the start of the briefing. Media interested in attending the briefing in Houston should contact Johnson’s newsroom no later than 5 p.m. Friday, Sept. 20. Media who are U.S. citizens and want to attend the briefing at Orbital should call Barron Beneski at 703-406-5528 or email public.relations@orbital.com by noon Friday, Sept. 20. Media who are not U.S. citizens must submit their information to Orbital by noon Monday, Sept. 16.

For information on the International Space Station, visit:
http://www.nasa.gov/station

For more information about the mission, and for an updated schedule of tours, briefings and NASA TV coverage, visit:
http://www.nasa.gov/orbital