By Jeff Goldstein on March 6, 2014 in Program News 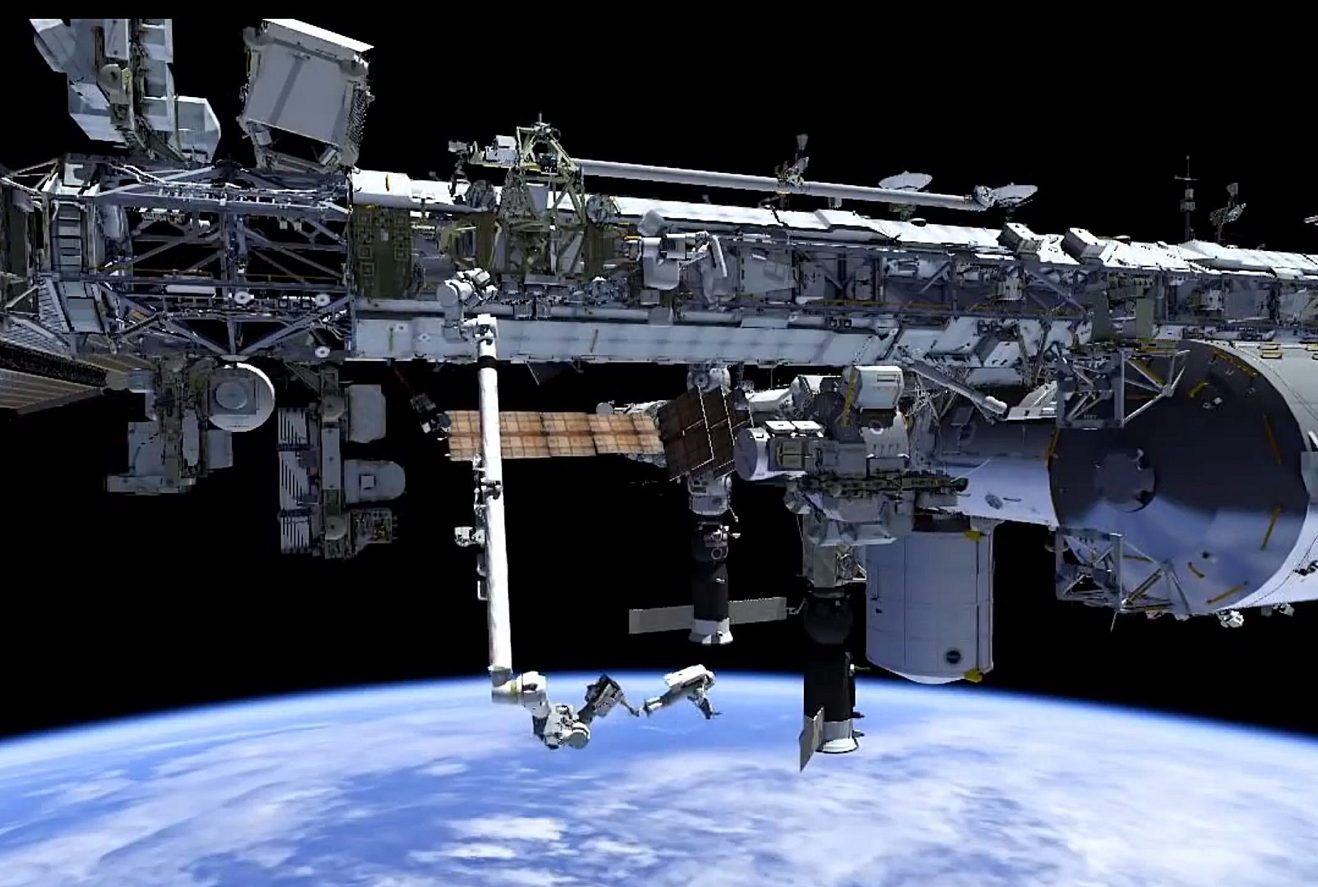 This is a highly accurate NASA digital simulation of what a spacewalk might look like from an imaginary camera away from ISS. You are only seeing a portion of Station. This gives you a good sense of the size of ISS. CLICK TO ZOOM

The International Space Station (ISS) is a truly remarkable laboratory located 260 miles (420 km) above Earth’s surface, and traveling at 17,000 mph (27,400 Km/hr) – that’s 4.7 miles per second. It is a massive spacecraft – the largest ever constructed and bigger than a football field, and is one of the most complex machines ever built by the human race. It is very visible from the ground, and regularly flies over your community. So take this as an invitation to your students, teachers, and their families to plan time to view ISS in the evening, or before dawn, as it flies overhead. It likely will be flying over your community before the 23 SSEP Mission 3b and 4 experiments that are aboard her right now, return to Earth next Monday, March 10.

Here is a wonderful NASA website that will allow you to input your location on Earth, and it will provide dates, times, and duration of visibility for ISS, either before dawn or after sunset. You can even sign up for email alerts letting you know when there will be an overflight.

You might even think about planning an ISS observing party, getting a presenter to talk about the universe, and asking local amateur astronomers to come out with their telescopes. You could turn this into a community engagement event, celebrating your community’s participation in SSEP and in America’s and Canada’s Space Programs. But in the meantime let families know they can go out over the next few days and see a most remarkable machine fly overhead – the second brightest object in the sky after the Moon – REALLY. And you’ve probably never seen it because it’s only visible for 6 minutes or less at very specific times, and in specific directions in the sky.

We also thought that for this post it would be appropriate to include a video that was showcased on this Blog back in January 2014, given last week’s start of SSEP for 19 Mission 6 to ISS communities. It is fitting – for as you look up and see ISS in your sky, with the video below, you will have a sense of what the astronauts aboard her are seeing when they look down … at you. From that post –

The National Center for Earth and Space Science Education and the Arthur C. Clarke Institute for Space Education wanted to share what we consider a gift to the human race. Only in the last 60 years has our technology allowed us to venture forth from this world, and see it from the solemnity of space. Countless human generations never got to see what you are about to see – the nature of our existence.

ISS provides a permanent human presence in space, and serves as an outpost from which we can look down on our world in reverence and in awe. And in that moment we see pride in ourselves, for the human need to explore has taken us to this high frontier. That need to explore is seen in our children, and threads through our lives. It is what propels the scientist and engineer. And it is what propels educators to create programs like SSEP – so that our children can be immersed in journey.

Right now student flight experiment teams from 23 communities in the U.S. and Canada have real microgravity experiments on ISS. Consider where your mini-laboratory is right now, traveling through space at 17,000 miles per hour (4.7 miles per second) at an altitude of 260 miles above Earth’s surface.

Time-Lapse EARTH was created by Bruce Berry, Jr., from footage taken by the astronauts on the International Space Station. Found below are Bruce’s notes on the making of the video. See more of Bruce’s work at http://bruce-wayne-photography.com

We invite you to recognize that you are part of this adventure through the Student Spaceflight Experiments Program, project the video below on a screen in your classrooms and boardrooms, turn down the lights, turn up the volume, and savor what we humans have done.

The Smithsonian National Air and Space Museum, Center for the Advancement of Science in Space (CASIS), and Subaru of America, Inc. are National Partners on the Student Spaceflight Experiments Program.

Update: On-Orbit Operations for SSEP Mission 3b & 4 Experiments – Return to Earth Monday, March 10, 7:00 PM EST
In Honor of the March 10, 2014, Return of Astronauts Hopkins, Kotov, and Ryazanskiy, and the SSEP M3b Falcon II and M4 Orion Experiments Payload, a Song by Canadian Astronaut Chris Hadfield (with a Shout-out to Our 2 Canadian SSEP Communities)