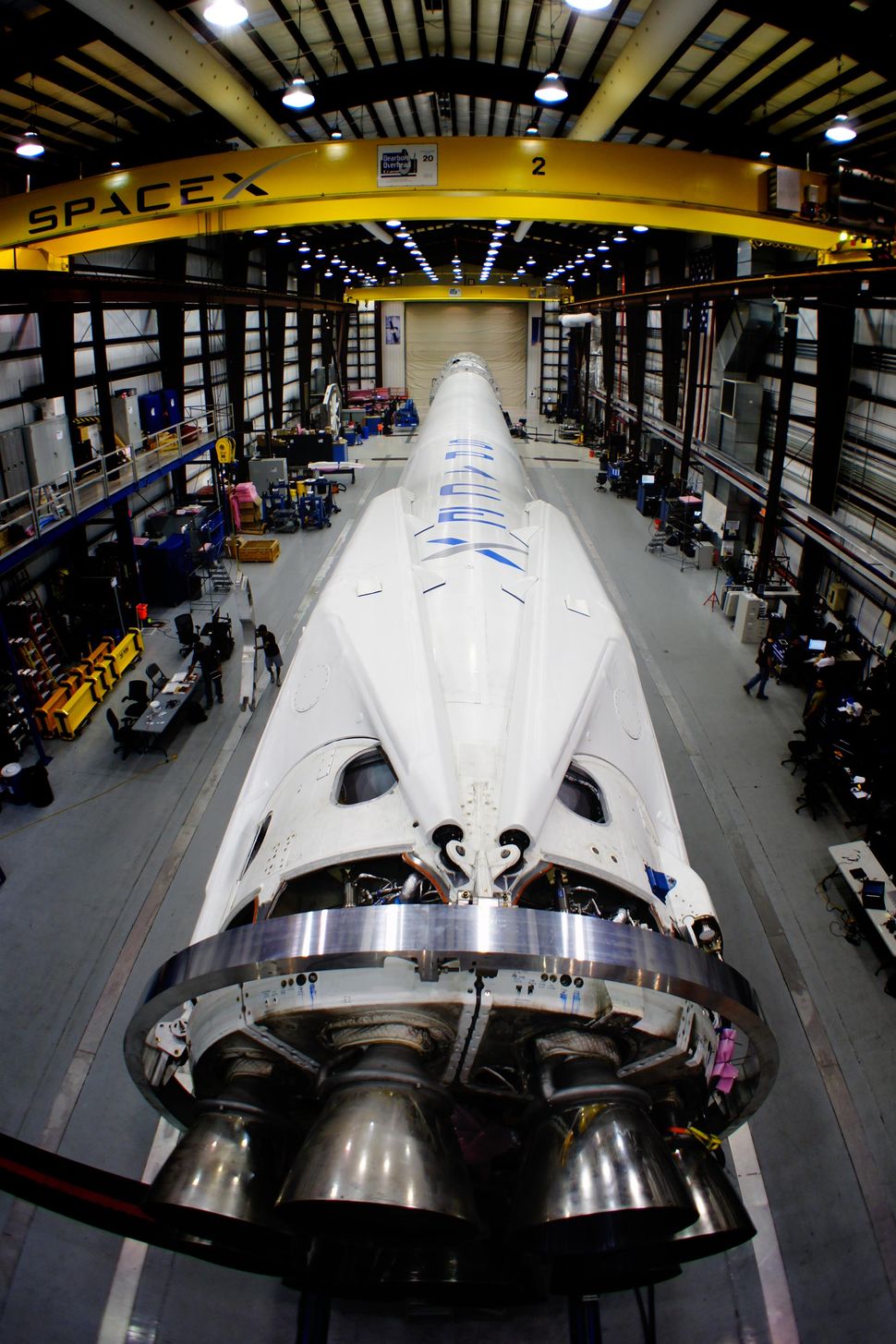 SpaceX-3 in hangar at Cape Canaveral Air Force Station prior to rollout to pad for today’s Launch. Photo-credit: SpaceX CLICK FOR ZOOM

The SSEP Charlie Brown payload of the 15 Mission 5 to ISS experiments are scheduled to launch on May 6, 2014, on Orbital Sciences 2 (Orb-2), out of the Mid-Atlantic Regional Spaceport (MARS), Wallops Island, Virginia. All student flight teams have been loading their flight and ground truth mini-laboratories, and shipping them to NanoRacks in Houston for integration into the Charlie Brown payload, payload handover to NASA, and NASA integration of Charlie Brown into the Cygnus spacecraft. NanoRacks has held multiple video-conferences to assist teams in real time with loading of their experiments into the mini-labs.

But all teams were operating under the assumption that while NASA required us to drive against a May 6 launch, there was a high probability that the Orb-2 mission would be scrubbed until June, and could require refilling of mini-labs at a later time and re-shipping to Houston. This is real spaceflight, and sometimes researchers need to drive down two pathways at the same time to ensure we are ready for multiple contingencies.

We thought this post would provide a powerful window on real SSEP spaceflight operations, and for the Mission 6 to ISS teams, a look at very real flight operations in advance of their 19 flight experiments launching as Yankee Clipper – the Mission 6 payload – expected to fly in Fall 2014.

Last Monday, the following guidance was sent by NCESSE to all Mission 5 student flight teams −

The launch of Orb-2 remains scheduled for May 6 with berthing at ISS on May 9. However, recent delays in the launch of both the ATLAS Mission and SpaceX-3 out of Cape Canaveral Air Force Station are likely going to impact the launch of Orb-2. If SpaceX-3 now successfully launches on April 14 and its Dragon spacecraft berths at ISS on April 16 (the revised launch operations schedule in wake of delays) then this will require the Orb-2 launch to be delayed until June 12.

Background: the contamination problem with the Space X-3 payload, and then the loss of the critical ground radar at the Cape has caused these delays. If the SpaceX-3 Dragon spacecraft does berth with ISS on April 16, it is not due to unberth until May 18. This would conflict with the Orb-2 Cygnus spacecraft’s ability to launch on May 6 and berth a few days later. ISS would be unable to berth both Dragon and Cygnus at the same time.

Since it remains unclear if SpaceX-3 will indeed be successful at launching on April 14, around 5:00 PM ET, NASA has made the determination that it will proceed with launch operations for Orb-2 on May 6 – unless SpaceX-3 launches as scheduled on April 14.

1. All teams must move forward with all flight ops for a May 6 Orb-2 launch, with all flight mini-labs arriving in Houston no later than May 18  for integration into the Charlie Brown payload.

2. NCESSE must prepare contingency plans – on April 14 (1 week from now) there is a high probability that NASA will slip the Orb-2 launch to June 12. NCESSE has already contacted all M5 student flight teams to assess if their experiment is perishable enough to warrant a re-fill and re-ship to Houston if the launch is delayed. Of the 15 flight teams, only North Attleborough, MA, had indicated they have a perishable enough experiment.

Expect that a June 12 launch would mean re-filled mini-labs would need to be in Houston by mid-May. Any teams that want to re-assess their situation and now want to plan for a refill need to let Stacy Hamel [the SSEP Flight Ops Manager] know ASAP. We need to alert NanoRacks, which would ship 5 new mini-labs to any community for refilling of their flight and ground truth mini-labs. NanoRacks needs to know ASAP how many mini-labs they need on hand.

Real spaceflight all the time,

Now skipping to the present, the following was sent to all flight teams a few minutes ago –

NASA has given SpaceX-3 a ‘go’ for its launch today from the Cape. There was a last minute concern due to the loss on Friday of a critical system aboard ISS which is required for grappling and berthing of the spacecraft on arrival. The system – the MDM – that went off line was a back-up on ISS, and the primary MDM continued operating normally. ISS managers decided yesterday [Sunday] that it was safe to fly Dragon to ISS.

So if SpaceX-3 and its Dragon capsule do indeed launch today for ISS at 4:58 pm ET from Cape Canaveral Air Force Station, we fully expect NASA to announce that our Orb-2 launch will be scrubbed until June.

Everyone – we are in hurry up and wait.

Real spaceflight all the time,
Jeff

So everyone reading this is now invited to follow this developing story, and imagine what the SSEP Mission 5 research teams are experiencing right now. Will SpaceX-3 launch today? Will there be a last minute scrub? Is it going to be a ‘go’ or a ‘no-go’ for a May 6 launch of Orb-2?

You can watch the launch of SpaceX-3 live right here on NASA TV. Launch is scheduled for 4:58 pm EDT.

Astronauts Enjoy Great Water on ISS! – Used to be Their Urine (What Did You Expect?)
April 17, 2014 FLIGHT OPS UPDATE: The Flight of Charlie Brown on Orb-2 – The SSEP Mission 5 Experiments Payload