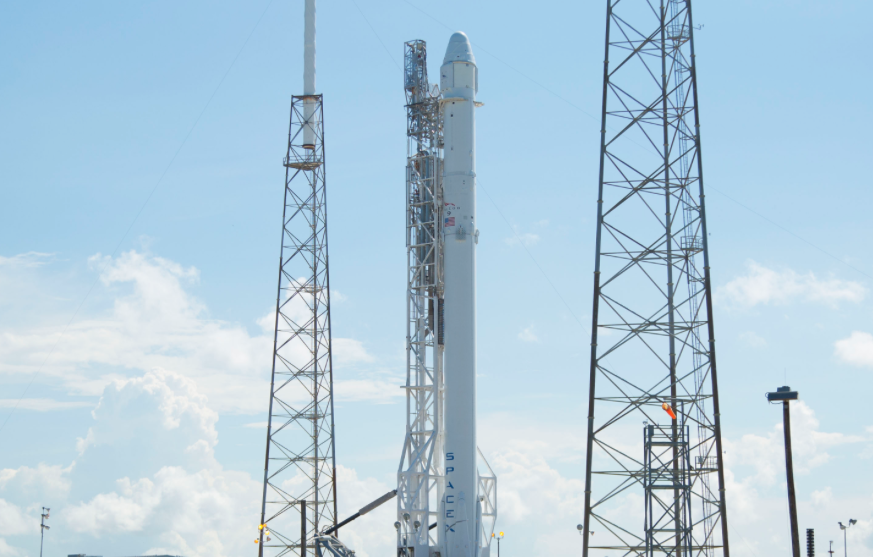 Dragon will arrive in orbit just 10 minutes after launch. Dragon is scheduled to arrive at Station on Wednesday, July 20.

All SSEP Mission 8 student microgravity research teams are awaiting on-orbit operation of their experiments by the astronauts, with 10 of the 15 experiments scheduled to be activated  on arrival at station on likely Wednesday.  A record of all on-orbit operations will be provided by the astonauts to ground controllers, relayed to launch services provider NanoRacks, and onto the SSEP Flight Ops national team at the National Center for Earth and Space Science Education (NCESSE). NCESSE will then post that record on the SSEP Mission 8 to ISS Experiment Log page and inform all student teams, allowing them to concurrently operate their ground control experiments by mirroring operations on orbit.

The launch of SpaceX CRS-9 will be covered live on NASA TV, and we have provided a video portal below if you’d like to watch right here on the SSEP National Program website. Launch coverage on NASA TV begins at 11:30 pm EDT, Sunday, July 17, 2016.

If there is a scrub,  NASA will recycle if possible to the next launch opportunity on Wednesday, July 20, 2016, with launch at 12:00 am EDT.

Below is the July 12, 2016, NASA Media Advisory which provides more details on the flight of SpaceX CRS-9.

In addition, SpaceX will have a live webcast of the launch, and we have also provided a video portal for the SpaceX webcast below.

SSEP – real spaceflight all the time. That’s what we promised.

As of this writing, we are at T-minus 14 Hours, 30 minutes and counting. Godspeed Dragon.

Mission 8 to ISS Experiments and Historical Data
The Mission 8 to ISS Kitty Hawk payload is comprised of 15 microgravity experiments being performed across a wide range of disciplines, including: antibiotic effectiveness, studies of fungi, microbiology, seed germination, water absorption, collagen degradation, storage of medicines, and biofilm formation. A total of 14 communities across the U.S. and Canada engaged 3,290 grade 5-16 students in microgravity experiment design. A total of 708 flight experiment proposals were submitted by student teams across the 14 communities. Of those, 352 proposals were forwarded for review by Step 1 Review Boards in each of the communities. Each Step 1 Review Board selected three finalist proposals, which were submitted to the National SSEP Step 2 Review Board. One community, Suffolk County, New York, underwrote the flight of two experiments – one for each of their two participating school districts – and submitted 6 finalist proposals.

On May 19, 2015, the Step 2 Review Board met at the Smithsonian National Air and Space Museum, reviewed all finalist proposals, and selected one proposal to fly for each community (two for Suffolk County, NY), for a total of 15  flight experiments. By May 28, 2015, the National Center for Earth and Space Science Education and the Arthur C. Clarke Institute for Space Education formally notified each community of their selected flight experiments.

WATCH THE SPACEX LIVE WEBCAST ON THIS VIDEO PORTAL

NASA provider SpaceX is scheduled to deliver scientific research, crew supplies and hardware on its ninth Commercial Resupply Services mission to the International Space Station Monday, July 18. Coverage of this mission will begin with a prelaunch news briefing at 2 p.m. EDT Saturday, July 16, on NASA Television and the agency’s website.

The SpaceX Dragon cargo spacecraft is scheduled for liftoff on the company’s Falcon 9 rocket at 12:45 a.m. Monday from Space Launch Complex 40 at Cape Canaveral Air Force Station in Florida. Coverage of the launch begins at 11:30 p.m. Sunday, July 17.

Approximately 10 minutes after launch, Dragon will reach its preliminary orbit, deploy its solar arrays and begin its two-day voyage of carefully choreographed thruster firings to reach the space station. After arrival, NASA astronaut Jeff Williams will use the station’s 57.7-foot (17.6-meter) robotic arm to reach out and capture the Dragon spacecraft. NASA astronaut Kate Rubins will serve as his backup, and ground controllers will send commands for the station’s robotic arm to install Dragon on the Earth-facing side of the Harmony module.

Live coverage of the rendezvous and capture will begin at 5:30 a.m. Wednesday, July 20, with installation coverage at 9:45 a.m.

The following day, the Expedition 48 crew will pressurize the vestibule between the station and Dragon, open the hatch between the two spacecraft, and begin the five-week process of unloading the almost 4,900 pounds of supplies and reloading the spacecraft with cargo scheduled to return to Earth Aug. 29.

Among the arriving cargo is the first of two international docking adapters, which will provide a means for commercial spacecraft to dock to the station when transporting astronauts in the near future as part of NASA’s Commercial Crew Program.

Experiments launching to station include a space-based DNA sequencer, which the station crew will test. This sequencer has the potential to identify microbes, diagnose diseases and evaluate crew member health, and even help detect DNA-based life elsewhere in the solar system. Other experiments seek to expand our understanding of bone cell function, track heart changes that occur in microgravity, and regulate internal spacecraft temperatures.

If the launch does not occur Monday the next launch opportunity is 12 a.m. Wednesday, July 20, with NASA TV coverage starting at 10:45 p.m. Tuesday, July 19.

For an updated schedule of prelaunch briefings, events and NASA TV coverage, visit:

Learn more about the SpaceX mission to the International Space Station at:

WATCH LIVE: The Flight OF SSEP M7 Odyssey II – Return to Earth, May 11, 2016
SSEP Mission 11 to the International Space Station Has Begun: Welcome Aboard to 13,500 Participating Students Across 21 Communities in the U.S. and Canada