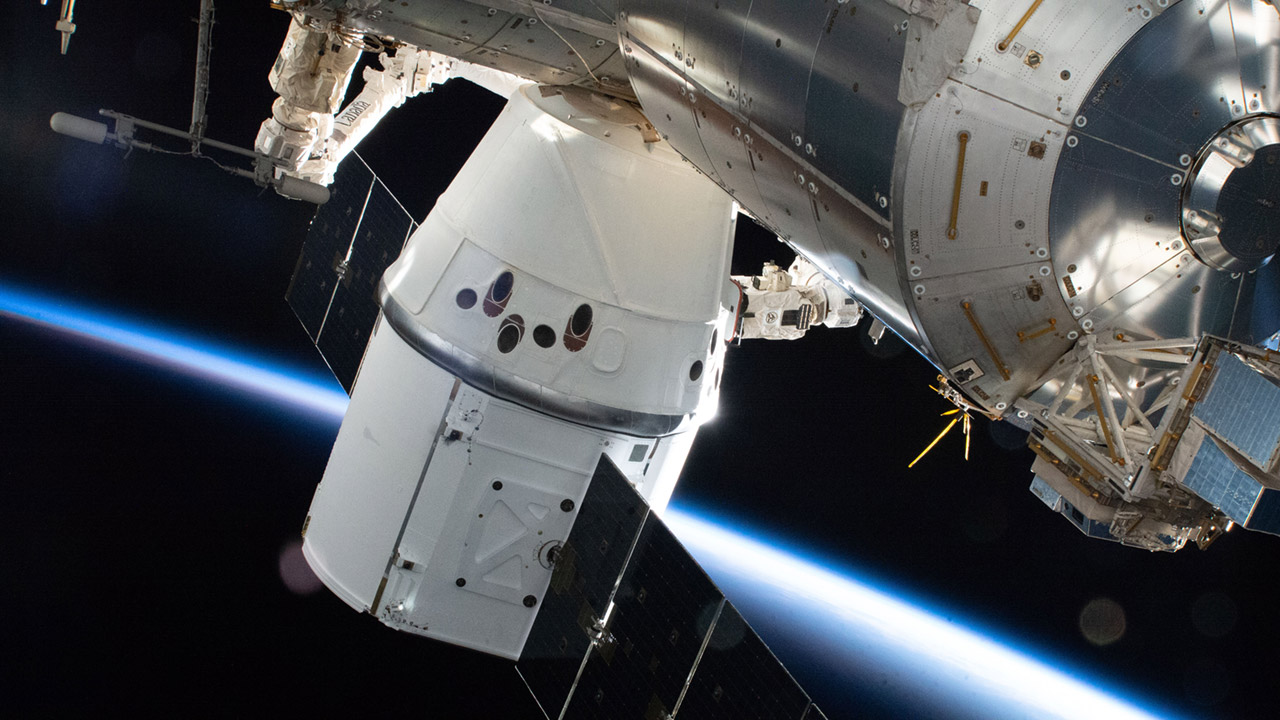 Caption: Five experiments from Student Spaceflight Experiment Program (SSEP) Missions 14 and 15 to the International Space Station are scheduled to launch aboard SpaceX-22 at 1:29 pm ET, June 3, 2021, from NASA’s Kennedy Space Center in Florida. Seen above is SpaceX-21 docked at the International Space Station against the limb of Earth, SpaceX-21 launched on December 6, 2020 and carried 27 SSEP Mission 14 experiments. Credit: NASA

Note: 1 additional Mission 14 experiment has been moved to a later flight due to the impact of Covid-19 on the ability of student teams to prep for flight.

We are all very proud of you. You are the next generation of researchers on the frontiers of exploration.

As of this writing, we are at T-minus 1 day and counting – see the countdown clock in the right column.

Prior to launch, I would like to address SSEP students, and their teachers, administrators, and families. I want to provide a sense of their remarkable accomplishment – and not just the flight teams but all 18,300 SSEP Mission 14 and Mission 15 student researchers, and the 25,900 students engaged in the mission patch competitions – and let them know they are truly part of America’s Space Program. I want to speak not just from the vantage point of creator and director of SSEP, but also from the vantage point of 11 year old me watching the launch of Apollo 11 in July of 1969 and knowing in that moment I wanted to be a space explorer. There are these moments in our lives that change us, and maybe the launch on Saturday, with your community’s experiment aboard, can be one of those moments for many Mission 14 and Mission 15 students. That’s why we created this program.

The launch will be covered live on NASA TV and at SpaceX, and we’ve provided video portals below for both if you’d like to watch right here on the SSEP National Program website. Also below is the August 20, 2021, NASA Media Advisory that provides NASA TV live coverage times for launch on Saturday, August 28 and arrival at Station on Sunday, August 29.

Schedule of Events for Friday, August 27

Schedule of Events for Saturday, August 28

Schedule of Events for Sunday, August 29

9:30 am ET – NASA TV coverage begins for Dragon docking to the ISS.

We also invite you to explore the SSEP Launch and On-Orbit Operations History page, which provides a sense of the rich history of the SSEP Program. Here you will find s list of SSEP missions and payload designations, videos of all SSEP launches, a list of all astronauts that have operated SSEP experiments, and videos of astronauts operating the experiments.

NASA commercial cargo provider SpaceX is targeting Saturday, Aug. 28, at 3:37 a.m. EDT to launch its 23rd commercial resupply services mission to the International Space Station. Liftoff will be from Launch Complex 39A at the agency’s Kennedy Space Center in Florida. SpaceX’s Dragon spacecraft will deliver new science investigations, supplies, and equipment for the international crew.

Live coverage will air on NASA Television, the NASA app and the agency’s website, with prelaunch events starting Friday, Aug. 27.

Dragon will deliver a variety of NASA investigations, including one that will determine if metabolites from grape skins and seeds used in wine making could help prevent and treat osteoporosis. A new robotic arm scheduled for demonstration could reveal potential uses on Earth, including in disaster relief. Another experiment will test an implantable, remote-controlled drug delivery system that will utilize a new research facility aboard the orbiting laboratory. Several Girl Scouts’ experiments also will use this new facility to study plants, ants, and brine shrimp in microgravity.

About 12 minutes after launch, Dragon will separate from the Falcon 9 rocket’s second stage and begin a carefully choreographed series of thruster firings to reach the space station. Arrival to the station is planned for Sunday, Aug. 29. Dragon will dock autonomously to the forward-facing port of the station’s Harmony module, with Expedition 65 Flight Engineers Shane Kimbrough and Megan McArthur of NASA monitoring operations.

The spacecraft is expected to spend about a month attached to the orbiting outpost before it returns to Earth with research and return cargo, splashing down off the coast of Florida.

Full coverage of this mission is as follows (all times Eastern):

9:30 to 11 a.m. – Previously credentialed media will have an opportunity to speak one-on-one with scientists in their labs and other subject matter experts at Kennedy’s Space Station Processing Facility. All participants must comply with COVID-19 safety protocols.

12 p.m. – NASA TV will broadcast a prelaunch news conference from Kennedy with representatives from NASA’s International Space Station Program, SpaceX, and the U.S. Space Force Space Launch Delta 45. Due to COVID-19 safety protocols, the news conference will be dial-in only. For the dial-in number and passcode, please contact the Kennedy newsroom at: ksc-newsroom@mail.nasa.gov no later than 11 a.m. Friday, Aug. 27. The public can also ask questions, which may be answered in real-time during the segment, by using #AskNASA on Twitter.

Immediately following the news conference, NASA TV will air a “What’s on Board” video that will introduce the public and media to some of the investigators flying science on this mission.