By Jeff Goldstein on September 29, 2021 in Program News 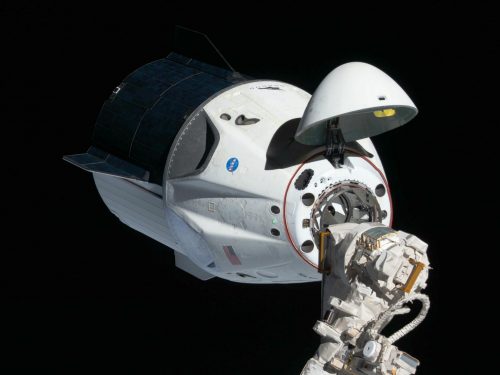 On September 1, 2021, 13,100 students across the U.S., Canada, and Ukraine began SSEP Mission 16 to ISS, and have had the unique opportunity at program start to follow along with on-orbit operations of SSEP experiments by the astronauts for the last month.

On Thursday, September 30, 2021, at approximately 9:05 am EDT, SpaceX-23 is scheduled to undock from ISS and Return to Earth (RTE) and splashdown off the coast of Florida. The SSEP payloads will then be processed by Nanoracks and returned to the SSEP flight teams for harvesting and analysis.

For the Mission 16 communities, this is a preview of things to come with the launch of 26 Mission 16 experiments in late Spring / Summer 2022. Mission 17 to ISS is scheduled to begin in early September 2022, with a launch to ISS in late Spring 2023. Communities interested in coming aboard SSEP Mission 17 should contact Dr. Jeff Goldstein, Center Director, National Center for Earth and Space Science Education, SSEP National Program Director, at: jeffgoldstein@ncesse.org

If you want to watch the Dragon spacecraft depart the ISS, NASA TV coverage of the undocking will begin at 8:45 am EDT. You can watch via the NASA TV video portal below. Also below is the NASA Press Release on the SpaceX-23 departure.

Flight Engineer Pesquet deactivated the experiments at 4:30 am EDT. Details of the deactivation on orbit were then communicated to Earth, to Marshall Space Flight Center, and then in turn to Johnson Space Center and to our launch services provider, Nanoracks. Nanoracks then informed the National Center for Earth and Space Science Education at 9:26 am EDT. The Center then formally recorded the activity on the SSEP Mission 14/15 to ISS Experiment Log page.

This is the last of the 5 scheduled Crew Interaction Days with the Apollo and Skylab experiments: Arrival day (A=0); Arrival plus 2 days (A+2); Undock minus 14 days (U-14); Undock minus 5 days (U-5); and Undock minus 2 days (U-2). The schedule of available Crew Interaction Days for SSEP is one of many real spaceflight operational constraints that all student teams must take into account when designing and proposing SSEP experiments. Click on the graphic at right to see the Crew Interaction Schedule for Apollo and Skylab experiments, which were integrated into the overall ISS crew schedule by Marshall Space Flight Center and Nanoracks months before launch as part of lock-down of the flight configuration for all SSEP experiments.

To provide a sense of the formal communications for Apollo and Skylab experiment activity, below is the Nanoracks communique received by the National Center for Earth and Space Science Education providing the details of the on-orbit activities:

The following clamps were opened:

The following experiments were shaken:

Ground controllers at SpaceX in Hawthorne, California, will command Dragon to undock from the forward port on the station’s Harmony module at 9:05 a.m. NASA astronaut Shane Kimbrough will monitor the process from inside the station’s Cupola. Cargo Dragon will fire its thrusters to move a safe distance away from the station prior to a deorbit burn later in the day that will begin its re-entry into Earth’s atmosphere.

The spacecraft will make parachute-assisted splashdown around 11 p.m. off the coast of Florida. NASA Television will not broadcast the splashdown live, but will provide updates on the space station blog.

Splashing down off the coast of Florida enables quick transportation of the science aboard the capsule to NASA’s Space Station Processing Facility at the agency’s Kennedy Space Center in Florida. The experiments were designed to take advantage of microgravity aboard the space station – the short transportation timeframe allows researchers to collect data from them with minimal sample exposure to Earth’s gravity.

The departing Dragon spacecraft delivered more than 4,800 pounds of research investigations, crew supplies, and vehicle hardware to the station for SpaceX’s 23rd Commercial Resupply Services mission. It launched Sunday, Aug. 29, on a SpaceX Falcon 9 rocket from Launch Complex 39A at Kennedy and arrived at the orbiting laboratory about 32 hours later.

Some of the scientific investigations Dragon will return to Earth include:

Ring Sheared Drop examines the formation and flow of abnormal proteins, called amyloids, in the absence of solid walls, which can influence chemical interactions. Results could contribute to a better understanding of neurodegenerative diseases, such as Alzheimer’s, as well as the development of advanced materials.
Anti-Atrophy tests the ability of biomaterials to inhibit muscle atrophy in microgravity. Results may lead to the production of pharmaceuticals to prevent muscle atrophy, not only for astronauts in space, but also for the elderly on Earth.
Genes in Space-8 tests a technology for monitoring gene expression in space. This test could lead to a better understanding of spaceflight-induced changes in liver gene expression and may support the development of new therapies that can account for the body’s adaptations to spaceflight.

Learn more about SpaceX missions for NASA at:

The Student Spaceflight Experiments Program (SSEP) is a program of the National Center for Earth and Space Science Education (NCESSE) in the U.S., and the Arthur C. Clarke Institute for Space Education internationally. It is enabled through a strategic partnership with Nanoracks LLC, working with NASA under a Space Act Agreement as part of the utilization of the International Space Station as a National Laboratory. SSEP is the first pre-college STEM education program that is both a U.S. national initiative and implemented as an on-orbit commercial space venture.