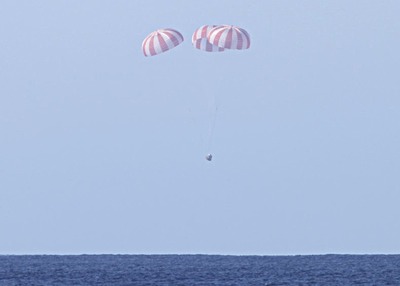 NASA TV will be providing live coverage of the return to Earth of the Dragon spacecraft. If you’ve been following this historic flight, you might want to tune in, and this post includes a live NASA TV video window. Below the video window is the official NASA Media Advisory for Dragon Coverage.

Note that the Aquarius payload of SSEP Mission 1 experiments has only been on ISS less than 1 week, and is not scheduled to return to Earth until July 1, 2012, on Soyuz 29S.

HOUSTON — NASA Television will provide extensive coverage of the
departure of the SpaceX Dragon capsule from the International Space
Station before its reentry and splashdown on May 31.

On Wednesday, May 30, a news briefing previewing the departure
activities will be held at NASA’s Johnson Space Center in Houston at
9 a.m. CDT (10 a.m. EDT) and will be broadcast live on NASA TV and
the agency’s website. Participants include NASA Flight Director Holly
Ridings and SpaceX Mission Manager John Couluris.

A news briefing will be held jointly from Johnson and SpaceX in
Hawthorne, Calif., at 1 p.m. CDT (2 p.m. EDT) live on NASA TV.

Media representatives can participate in person at Johnson or via
telephone by calling 281-483-5111 at least 15 minutes before each
briefing. Media badges from Dragon launch activities at NASA’s
Kennedy Space Center in Florida will be honored at Johnson through
splashdown.

For up-to-date information about the SpaceX mission, visit:
http://www.nasa.gov/spacex

SSEP is undertaken by the National Center for Earth and Space Science Education (NCESSE) in partnership with NanoRacks LLC. This on-orbit, real research opportunity for students is enabled through NanoRacks LLC, which is working in partnership with NASA under a Space Act Agreement as part of the utilization of the International Space Station as a National Laboratory.

One Response to Live Coverage of Dragon Undocking, Reentry, and Splashdown Tomorrow Morning, May 31, 2012 – Note SSEP Mission 1 Aquarius Payload Not Aboard