By Jeff Goldstein on November 2, 2013 in Program News 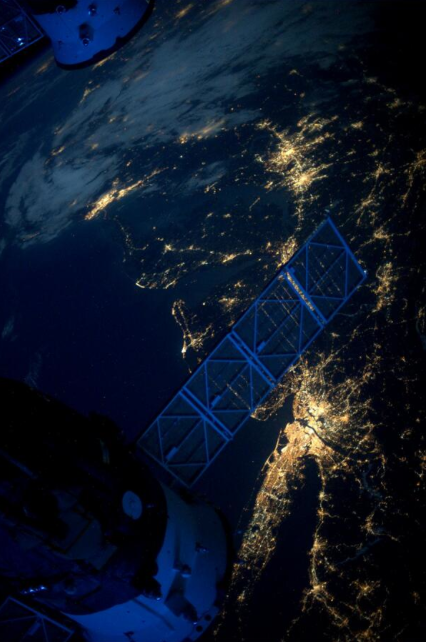 CLICK FOR ZOOM  Photo of New York and south along the U.S. east coast. Photographed by U.S. Astronaut Karen Nyberg, September 20, 2013, and posted on her Twitter  account http://pic.twitter.com/cufP6gKuRZ

The NASA press release below, issued last Wednesday, October 30, provides a great sense of what’s coming up this week on the International Space Station, including the return of the SSEP Falcon I payload. It’s become quite the Grand Central Station in orbit.

SSEP student flight teams are now preparing for the return of Falcon I aboard Soyuz 35S. Teams will soon be standing by for harvesting of both their flight and ground truth mini-labs and analysis. Scheduled for departure from ISS and de-orbit on Sunday November 10, Soyuz 35S will land on the plains of Kazakhstan with Expedition 37 Commander Fyodor Yurchikhin (Russia) and Flight Engineers Karen Nyberg (NASA) and Luca Parmitano (ESA). Parmitano and Nyberg have been operating the SSEP Falcon I experiments. Undocking coverage on NASA TV begins 6 pm ET, and we will provide a NASA TV portal right here on the SSEP National Blog.

Karen Nyberg took some pretty incredible photos of Earth from the International Space Station and posted them on her Twitter account (@AstroKarenN; check out more of her photos on Twitter). The photo above shows docked Soyuz vehicles over New York City, Long Island, and looking south along the eastern seaboard. The I95 corridor is a ribbon of light threading through New York City, Philadelphia, Baltimore, and Washington, DC. You’re looking at tens of millions of human beings at night – and look between Washington, DC, and Baltimore, I’m waving!

Falcon I Operations Update:
The final Falcon I experiment – Howard County, Maryland – was activated on schedule on Friday, November 1, 2013, by American astronaut Karen Nyberg. The final crew interactions on orbit with Falcon 1 will take place on Monday, November 4, 2013, with the de-activation of 2 experiments (Howard County, Maryland, and San Marino, CA #1). Follow along with on-orbit activities at the SSEP Mission 3 to ISS: Experiment Log page.

The following experiment was activated:
S/N 1007, Tube 2:The Effect of Microgravity on Chryseobacterium Aquaticum Growth
More information about these experiments can be found at the following link:
http://ssep.ncesse.org/current-flight-opportunities/ssep-mission-3-to-the-international-space-station-iss/ssep-mission-3-to-iss-flight-phase-operations/ssep-mission-3-to-iss-experiment-log/
Unexpected Events: N/A
Science Look Ahead: The next crew interaction will be on GMT 308 (November 4). Tubes 2 and 5 will be deactivated by Karen Nyberg.
Topics for resolution: N/A

International Space Station crews commuting to and from their orbiting laboratory will be busy this November, and NASA Television will provide live coverage of their launches, landings and relocations.

Traffic starts to pick up Friday, Nov. 1. Expedition 37 Commander Fyodor Yurchikhin of the Russian Federal Space Agency (Roscosmos) and Flight Engineers Karen Nyberg of NASA and Luca Parmitano of the European Space Agency will climb into their Soyuz spacecraft, back out of one Russian Earth-facing docking spot and fly a short distance to another one at the end of the station. NASA TV coverage starts at 4 a.m. EDT. The 24-minute maneuver begins with undocking at 4:34 a.m.

The Soyuz move opens up the Rassvet docking port for another Soyuz transporting Expedition 38/39 Flight Engineer Rick Mastracchio of NASA, Soyuz Commander Mikhail Tyurin of Roscosmos and Flight Engineer Koichi Wakata of the Japan Aerospace Exploration Agency to the station. Aboard their spacecraft is the Olympic torch, which is taking an out-of-this-world route — as part of the torch relay — to Fisht Stadium in Sochi, Russia. There, the torch will be used to light the Olympic flame at the stadium, marking the start of the 2014 winter games.

Mastracchio, Tyurin and Wakata will join Yurchikhin, Nyberg and Parmitano, plus Oleg Kotov and Sergey Ryazanskiy of Roscosmos and Michael Hopkins of NASA. Their arrival will be the first time since May 2009 that nine people have served together aboard the space station without the presence of a space shuttle.

On Sunday, Nov. 10, after Yurchikhin has transferred command of the station to Kotov, the Soyuz carrying Yurchikhin, Nyberg and Parmitano will undock for a parachute-assisted landing on the steppe of Kazakhstan at 9:50 p.m. (8:50 a.m. Kazakh time on Nov. 11), wrapping up a 166-day mission. Hatch closure coverage begins at 2:30 p.m. Nov. 10 with a replay of the change of command ceremony. Undocking coverage begins at 6 p.m., and deorbit and landing coverage begins at 8:30 p.m.

Special video feeds of pre-launch activities by the crew will resume on Friday, Nov. 1, and continue through Wednesday, Nov. 6.

All the times of International Space Station programming, key Soyuz event coverage and other NASA Television programming can be found at:

For information about the International Space Station, research and its crews, visit:

The Flight of SSEP Falcon 1: ISS On-Orbit Flight Operations Update, Final Experiment to be Activated November 1, 2013
In Honor of the November 10, 2013, Return of Astronauts Yurchikhin, Nyberg, and Parmitano, and the SSEP Falcon I Experiments Payload, a Song by Canadian Astronaut Chris Hadfield (with a Little Help from David Bowie)