By Jeff Goldstein on January 5, 2015 in Program News 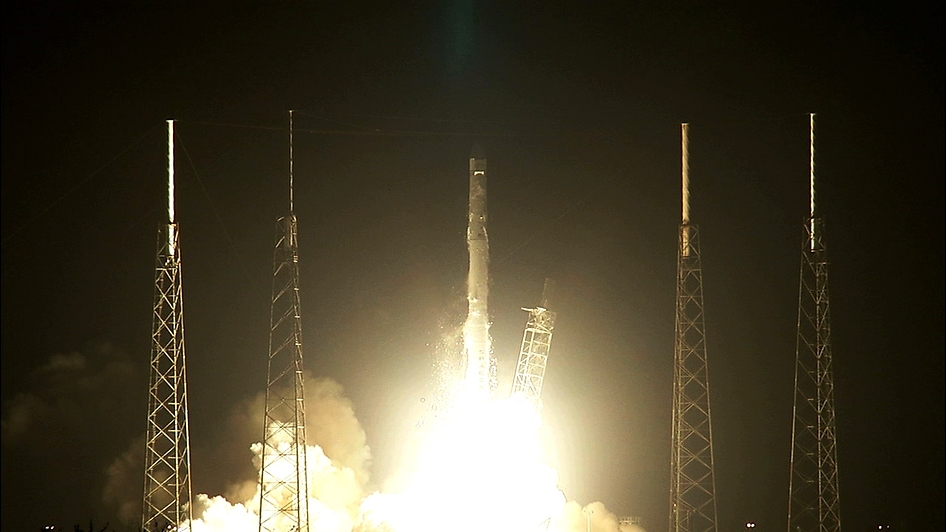 We are a ‘go’ for liftoff of SpaceX-5 on Tuesday, January 6, 2015. As part of the cargo being transported to the International Space Station will be the SSEP Mission 6 to ISS Yankee Clipper II payload of experiments originally lost on Orb-3 on October 28, 2014. Launch of SpaceX-5 is scheduled for 6:20 am EST, from Cape Canaveral Air Force Station, adjoining Kennedy Space Center, Florida. With sunrise at 7:16 am EST, this will be a spectacular dawn launch. The fifth SpaceX Commercial Resupply Services Flight (SpaceX CRS-5) is comprised of a Dragon spacecraft sitting atop a Falcon 9 rocket.

The Mission 6 to ISS Yankee Clipper payload of experiments was originally to launch on Orb-3 from the Mid-Atlantic Regional Spaceport (MARS), Wallops Island, VA, in October 2014. On October 28, over 130 SSEP delegates were at the launch site just 1.7 miles from Pad 0-A, including 41 SSEP student researchers. A few seconds after ignition, rocket failure was apparent and range safety detonated the rocket. All Mission 6 experiments were lost. It was a devastating loss for the researchers. The experience in that moment was captured in a December 8, 2014, blog post:

The Loss of Orb-3 and SSEP Yankee Clipper: Failure Happens. What we do in the face of failure is what defines us.

After the loss of Orb-3, NASA and NanoRacks worked hard to re-manifest the lost experiments on SpaceX-5. Within a week of the loss of Orb-3, the National Center for Earth and Space Science Education was directed by NanoRacks to assess if the 18 student flight teams could send replacement experiments to Houston for payload integration by November 21, 2014, for a projected mid-December launch of SpaceX-5. This represented a stunningly short turn-around time. Our student flight teams stepped to the plate and had experiments to Houston by deadline. One team requested to swap out a component of their experiment, which requires a new Flight Safety Review with NASA Toxicology. That experiment will be flying with the SSEP Mission 7 to ISS payload in Spring 2015. Yankee Clipper II flying on SpaceX-5 is therefore comprised of 17 of the 18 Mission 6 experiments.

SSEP MISSION 6 TO ISS MEDIA PACKAGE Downloadable Documents (PDFs)
(Note that the documents below include the experiment from North Charleston, SC, which is the only experiment not flying as part of Yankee Clipper II.)

You are invited to watch the launch LIVE on NASA TV in the video portal below. Also below is the December 29, 2014, NASA Press Release on the flight of SpaceX-5, which provides an overview of milestone events and NASA TV coverage. Launch coverage begins at 5:00 am EST, January 6, 2015. Dragon is scheduled to be grappled at the International Space Station at roughly 6:00 am EST, Thursday, January 8, 2015, with live coverage beginning at 4:30 am EST.

The new launch date will provide SpaceX engineers time to investigate further issues that arose from a static fire test of the Falcon 9 rocket on Dec. 16, and will ensure proper sun angles for thermal and operational conditions to berth Dragon.

The prelaunch news conferences also have moved to Monday, Jan. 5, at the agency’s Kennedy Space Center in Florida. All briefings, which are subject to a change in time, will air live on NASA TV and the agency’s website.

The first briefing of the day will air at noon and cover the Cloud-Aerosol Transport System (CATS) Earth science instrument headed to the space station. Participants for this briefing will be:

The second briefing will air at 1:30 p.m. and cover some of the numerous science investigations headed to the space station. Participants for the science briefing will be:

The final briefing will air at 4 p.m. and provide up-to-date information about the launch. Participants for the prelaunch briefing will be:

An on-time launch on Jan. 6 will result in the Dragon spacecraft arriving at the space station on Thursday, Jan. 8. Expedition 42 Commander Barry “Butch” Wilmore of NASA will use the station’s 57.7-foot robotic arm to reach out and capture Dragon at approximately 6 a.m. Flight Engineer Samantha Cristoforetti of the European Space Agency will support Wilmore as they operate from the station’s cupola. NASA TV coverage of grapple will begin at 4:30 a.m. Coverage of Dragon’s installation to the Earth-facing port of the Harmony module will begin at 8:15 a.m.

Reporters who wish to participate by telephone must call Kennedy’s newsroom at 321-867-2468 no later than 15 minutes before the start of each briefing. Those following along on social media may ask questions using the hashtag #askNASA.

For more information about the International Space Station, visit:
http://www.nasa.gov/station

Flight of Yankee Clipper II: SpaceX-5 Launch Scrubbed, Reset for NET January 6, 2015
We have a SCRUB for SpaceX-5 Launch, Recycling to Friday January 9, 5:09 am