By Jeff Goldstein on March 8, 2015 in Program News 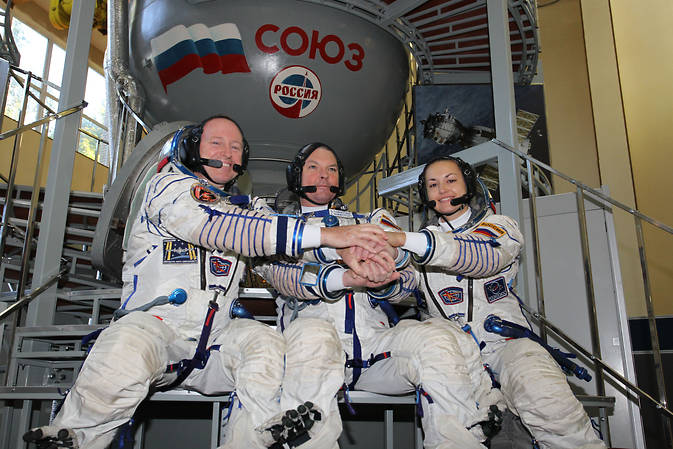 International Space Station (ISS) Expedition 42 Commander Barry Wilmore (USA), and Flight Engineers Alexander Samokutyaev (Russia) and Elena Serova (Russia) will be returning to Earth on Wednesday, March 11, 2015, in a Soyuz spacecraft. You can watch LIVE, in the NASA TV window below, the ISS change of command ceremony on March 10, and hatch closure, undocking, de-orbit, and landing in Kazakhstan on March 11, 2015. Also below is the March 4, 2015, full NASA Press Release on return to Earth, with NASA TV live coverage times (all Eastern Time).

This is a milestone event for SSEP Mission 6 to ISS. After the October 28, 2014, loss of the Orb-3 rocket and all original Mission 6 Yankee Clipper experiments, the Yankee Clipper II replacement experiments launched to Station on SpaceX-5 Dragon on January 10, 2015, from Cape Canaveral Air Force Station, FL, (watch liftoff), and departed Station and returned to Earth on the same vehicle on February 10. While aboard ISS, Station Commander Wilmore operated all 17 re-flight experiments on the 5 scheduled Crew Interaction Days (see Mission 6 Experiment Log). All Mission 6 student flight teams are now harvesting and analyzing both their ground and flight experiments.

It is now a SSEP tradition that whenever astronauts operating SSEP payloads return to Earth, we share what that must be like with the over 100 communities across the U.S. and Canada participating in this program. The video below captures the experience for astronauts departing ISS, possibly for the last time in their careers. It is David Bowie’s Space Oddity sung by Canadian astronaut Chris Hadfield. This is particularly poignant given one Mission 6 experiment was from School District 73 in Kamloops/Thompson, Britich Columbia, and three Canadian communities – University of Toronto Schools, Toronto, Ontario; Bishop Carroll High School, Calgary, Alberta; and Ryerson University, Toronto, Ontario – started Mission 8 on February 23, 2015.

Just before his return to Earth on Soyuz 33S, on May 13, 2013, Expedition 35 International Space Station Commander and Canadian astronaut Chris Hadfield – the first Canadian to walk in space –released this video.

Teachers, we invite you to lower the lights in your classrooms, select ‘full screen’ on the video below, project it on a big screen, and let all your SSEP student researchers see that they are truly part of this adventure. Afterward, you might also consider having a class discussion about the emotional content of this song, who is singing it (here is Chris’ bio at the Canadian Space Agency), where he is singing it, and what it must feel like to leave Low Earth Orbit and return to Earth after an extended stay on Station.

Human exploration? It is a wondrously emotional endeavor, and we express that emotion in myriad ways – through art, through prose and poetry, through story-telling, and through music. And all this goes hand-in-hand with science, and more generally STEM – really. The human condition is an interdisciplinary tapestry – something to be celebrated in all our classrooms.

We shall not cease from Exploration.
And the end of all our exploring
will be to arrive where we started
and know the place for the first time.
-T.S. Eliot

WATCH LIVE ON THE NASA TV PORTAL BELOW: ISS Change of Command and Expedition 42 Return to Earth  – See NASA Press Release Below for Coverage Times (all times Eastern)
http://www.nasa.gov/multimedia/nasatv/#.Ux37dCjn1sQ

NASA Television will provide complete coverage of their departure and return to Earth, beginning with the space station change of command ceremony on Tuesday, March 10.

Expedition 42 Commander Barry Wilmore of NASA will hand over command of the station to fellow NASA astronaut Terry Virts. At 6:44 p.m. Tuesday, Wilmore and flight engineers Alexander Samokutyaev and Elena Serova of the Russian Federal Space Agency (Roscosmos) will undock their Soyuz spacecraft from the space station and land in Kazakhstan at 10:08 p.m. (8:08 a.m. March 12 Kazakh time).

NASA Television coverage is as follows:

10:25 a.m. — Change of command ceremony in which Wilmore hands over station command to Virts

At the time of undocking, Expedition 43 officially will begin aboard the station under Virts’ command. Along with his crewmates Anton Shkaplerov of Roscosmos and Samantha Cristoforetti of ESA (European Space Agency), the three-person crew will operate the station for two weeks until the arrival of three new crew members.

For the NASA TV schedule and coordinate information, visit:

For b-roll and other media resources, visit:

For more information about the International Space Station, visit:

THE SOLUTION to the Mission 8 Student Challenge: Understanding Weightlessness – You Want Me to Take a Bathroom Scale Where?
New Flight Opportunity for School Districts: Announcing Student Spaceflight Experiments Program (SSEP) Mission 9 to the International Space Station for 2015-16 Academic Year