By Jeff Goldstein on February 21, 2020 in Program News

Congressional testimony November 5, 2019, at the hearing Building the Space Workforce of the Future: STEM Engagement for a 21st Century Education. The Student Spaceflight Experiments Program (SSEP) is showcased by Jeff Manber, CEO of NanoRacks, at time stamp 26 min 47 sec.

To all Student Spaceflight Experiments Program (SSEP) community stakeholders – school and school district leadership, funding organizations, and participating universities, and to the hundreds of SSEP Community Program Directors, thousands of SSEP teachers, over 125,000 SSEP student researchers, and hundreds of professional researchers that have served as advisors and review board members, I am honored to share with you testimony at a recent Congressional hearing on Capitol Hill.

On November 5, 2019, the Subcommittee on Aviation and Space of the U.S. Senate Committee on Commerce, Science, & Transportation convened a hearing titled “Building the Space Workforce of the Future: STEM Engagement for a 21st Century Education.” Witnesses discussed student engagement through STEM programs in partnership with NASA as a means of inspiring the next generation of America’s scientists and engineers, and developing the future space workforce.

The backstory: I am honored and proud to call Jeff a friend. I remember a lunch back in 2009 when I had this idea for a national STEM education program enabled by commercial spaceflight, and Jeff had just started a new commercial space company, NanoRacks, which would provide payload and launch services for commercial payloads. To help visualize what I had in mind, I sketched out my concept for SSEP on a napkin. That meeting was the moment the vision for this program became a reality when Jeff and Jeff agreed to make it happen. I kept that napkin, but for the life of me I cannot find it. My staff are still upset with me about that:)

SSEP would not be possible without the involvement and dedication of all of you at the local level. It is with that in mind that I wanted to share this post. If you know of SSEP stakeholders that may not be subscribed to this SSEP National Blog, feel free to pass along a link to this post.

At the top of this post is the C-SPAN video of the hearing. Jeff Manber’s testimony begins at time stamp 26 min 47 sec.

TO OUR CHILDREN – THE HISTORICAL SIGNIFICANCE OF THIS MOMENT IN TIME, AND HOW YOU ARE PART OF IT THROUGH SSEP

Celebrating the Past, Embracing the Present, Inspiring the Future

The subject of the hearing is a timely discussion. I firmly believe that 100 years from now historians will look back at this period early in the 21st century as the time the human race truly became a spacefaring species. With the advent of commercial spaceflight, travel beyond Earth is soon to become a reality for the public at large, not just for astronauts. There is historical precedent. In 1927, Charles Lindbergh won the $25,000 Orteig prize ($370,000 today) as the first aviator to fly across the Atlantic Ocean non-stop, from New York to Paris. The world was galvanized, and his feat heralded in the age of commercial aviation, as private companies raced to make flight available to the public. We all now routinely book a ticket, go to a nearby airport, and fly from one place to another inside a giant metal tube with windows, flying 6 miles above the Earth’s surface – higher than Mt. Everest, and traveling at a remarkable speed of 600 mph (1 mile every 6 seconds). Inside that tube, in a comfortable environment, you might watch a movie, read a book, talk to the person seated next to you … or peer out your window and look down on your world from 6 miles above. Think about that for moment. Think about what we have aspired to do, and in less than 100 years – just a fleeting moment in time relative to the span of human existence. 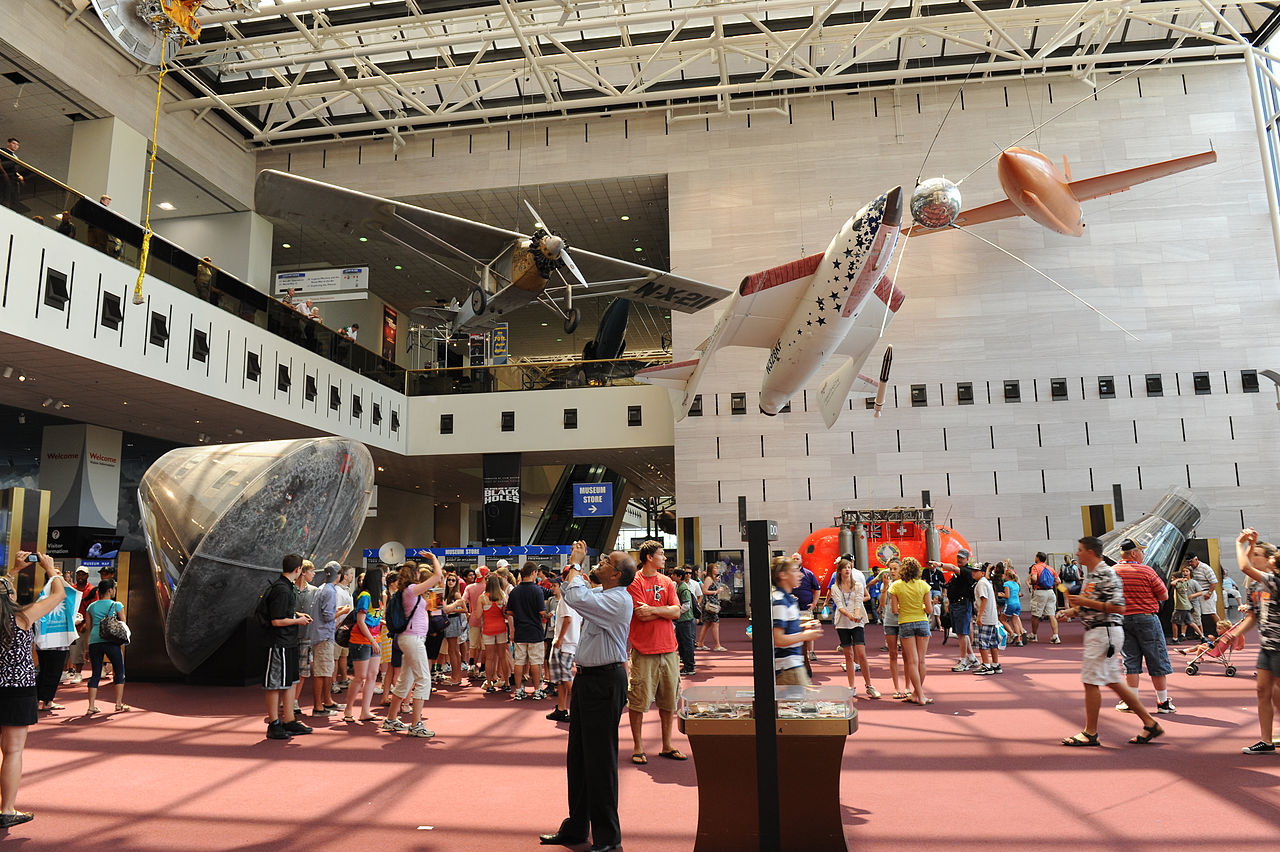 The Milestones of Flight gallery at the Smithsonian National Air and Space Museum in Washington, DC. The Spirit of St. Louis hangs from the ceiling at left. Charles Lindbergh flew it across the Atlantic in 1927. Hanging next to it for good reason is SpaceShipOne, which flew to space twice in 2004,  Click on the Image to Zoom

What’s past is indeed prologue. The Orteig Prize announced in May 1919 inspired the Ansari X Prize, announced 77 years later in May 1996. The $10 M Ansari X-Prize would be awarded for the first privately funded and built spacecraft to carry a human to space (to an altitude of 100 km or 62 miles). To win the prize required 2 flights by the vehicle within a 2 week period to demonstrate reusability.

In 2004 Scaled Composites won the Ansari X Prize prize with the flights of SpaceShipOne, and this feat has ignited a global fascination with routine travel to space for the public at large – and in the longer term, prospects for us living and working in space. As was the case in the early 20th century for commercial aviation, private sector companies are racing to make this vision a reality. We are all now on the cusp of the era of commercial space, the logical and natural extension to commercial aviation. Read about hotels in space in this decade, and NanoRacks’ vision for commercial space stations and habitats across the solar system.

This vision is spurred on by federal incentives for commercial innovation through agencies like NASA, and organizations like CASIS (the Center for the Advancement of Science in Space) which operates the U.S. National Laboratory on the International Space Station (ISS). It is important to note that research aboard ISS is absolutely foundational to the success of this new era, requiring research in, e.g., long duration spaceflight, space-based food production, and microbial behavior in microgravity. SSEP student researchers … does this sound familiar? As SSEP participating communities, your students, teachers, and community stakeholders are part of this great human adventure in the here and now –  each community granted access to Low Earth Orbit via commercial spaceflight for an experiment conducted by the next generation of space explorers. Each community immersing typically 300+ students in authentic microgravity research, and a formal research proposal competition.

I also firmly believe that 100 years from now the International Space Station will occupy its place in history as the seminal bridge between life on Earth and that of a spacefaring civilization. Like Eagle touching down on the Moon in 1969, and humans taking their first steps on another world, ISS will be recognized as providing the foothold into this brave new era characterized by a permanent human presence in space by private citizens. ISS is not just a national treasure (‘an artifact, institution, or public figure regarded as being emblematic of a nation’s cultural heritage or identity’), it is an ‘international treasure’ emblematic of humanity’s time immemorial quest to push the envelope, to see what is on the other side of the mountain. It is a biological imperative – we go forth because that’s what it means to be human.

In the coming years, private citizens will be able to fly to space, vacation in space, and see the limb of our world from orbit. It’s a vantage point that may in fact change humanity’s perspective of our home world as we bear witness from space that there are no national boundaries, that we all share this solitary fragile planet, and we all have a common interest in protecting it. It’s a perception that even has a name – the Overview Effect.

In the era of commercial space, we will be able to book a ticket, go to our nearby spaceport, and get inside a metal tube rocketing us to the edge of space more than 60 miles up, and traveling at speeds of up to 18,000 mph (4.5 miles per second). Surely this can no longer seem so fanciful. It’s coming, and in our lifetimes. Surely this is the stuff to inspire the next generation. This vision should be a clarion call to this next generation of scientists and engineers – needed right now to make the vision a reality.

All SSEP student flight teams already have their experiments launch on a rocket, travel to Low Earth Orbit, and be operated by the astronauts. But, here is the question … wouldn’t you like to go there yourself? It’s coming.

TO ALL STEM EDUCATORS

I would recommend that all teachers of science, technology, engineering and math watch the entire testimony above, which provides invaluable insight into the interdisciplinary objectives of STEM education, and its intersection with NASA and space. Watching the testimony in segments as an interdisciplinary group of teachers, followed by group discussion, would be a powerful STEM professional development experience.